The threat of heavy showers and thunderstorms will gradually be increasing primarily starting Thursday, and continuing through Saturday night.

A series of upper disturbances combined with a weak surface boundary will keep high rain chances across Texas again Wednesday, but some of the activity will try to slip through Acadiana (40-50% or less), mainly on a scattered basis, during the mid-morning into the mid-afternoon hours. 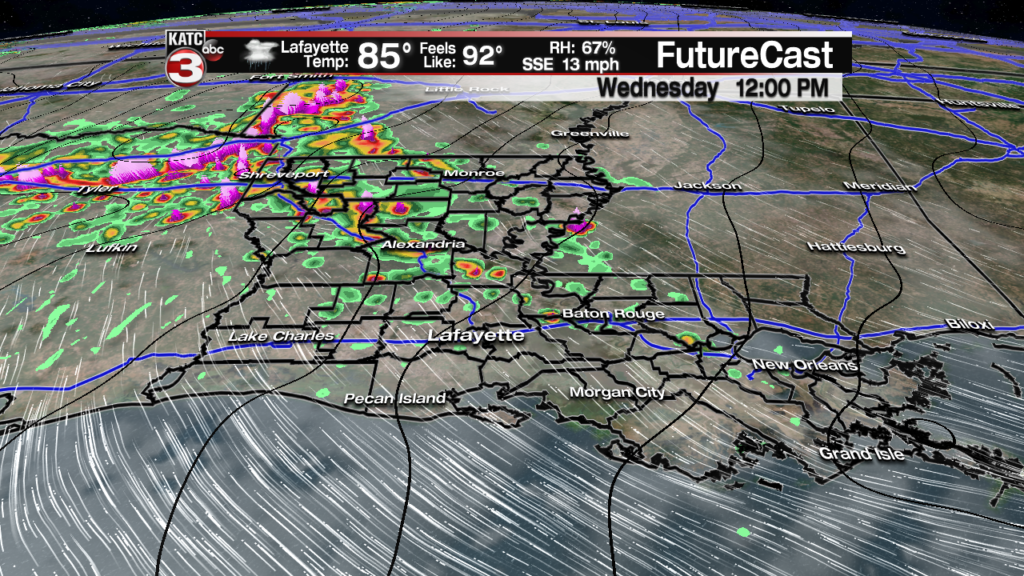 Temperature Wednesday will again reach the mid-upper 80s with some limited intervals of afternoon sun possible.

Computer models have been offering a variety of solutions, but the spirit of them all has been for the most substantial threats for periods of heavy rains developing for Acadiana starting Thursday (60%), with increasing rain chances into Friday and Saturday (80% or higher).

Remember, although there are high rain chances in the forecast, this does not necessarily mean each of those days will be complete washouts. 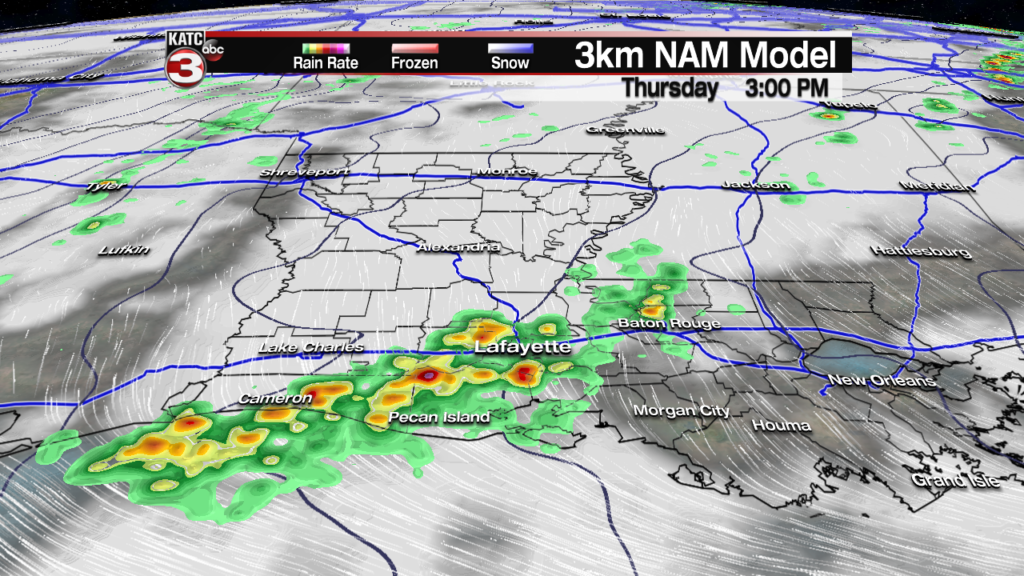 The most difficult part of the forecast will be the timing and intensity of storms for the area, but in the pattern ahead, the risk of storms won’t be confined to the daytime hours, but also during the overnight periods. 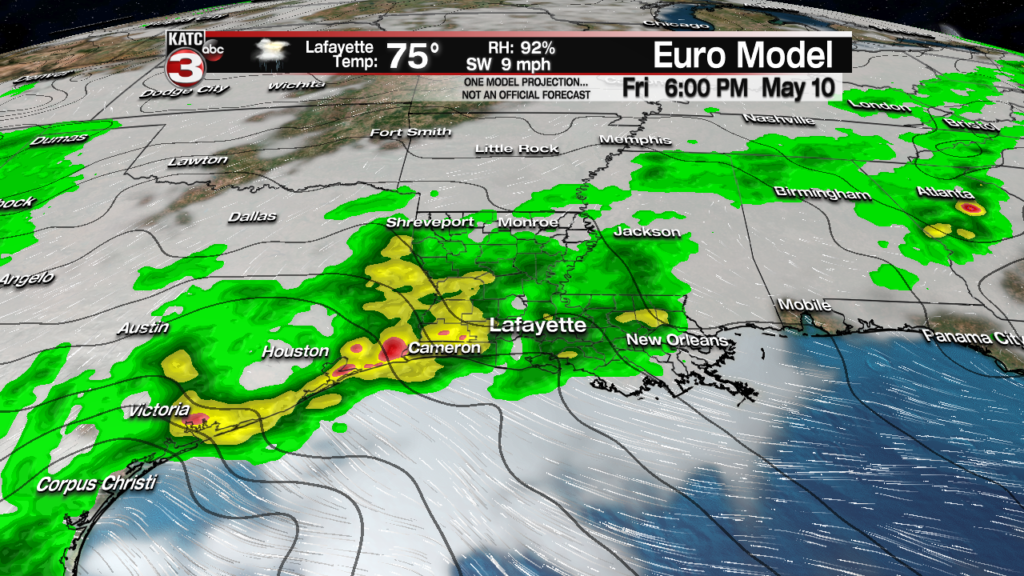 In addition to the threat of heavy rainfall, per the Storm Prediction Center (SPC) there will be mostly a marginal risk of a few severe storms Wednesday, with a much higher “enhanced” risk of severe storms confined to Texas from the Hill Country northeastward into Northwest Louisiana, where large hail and damaging winds will be most likely. 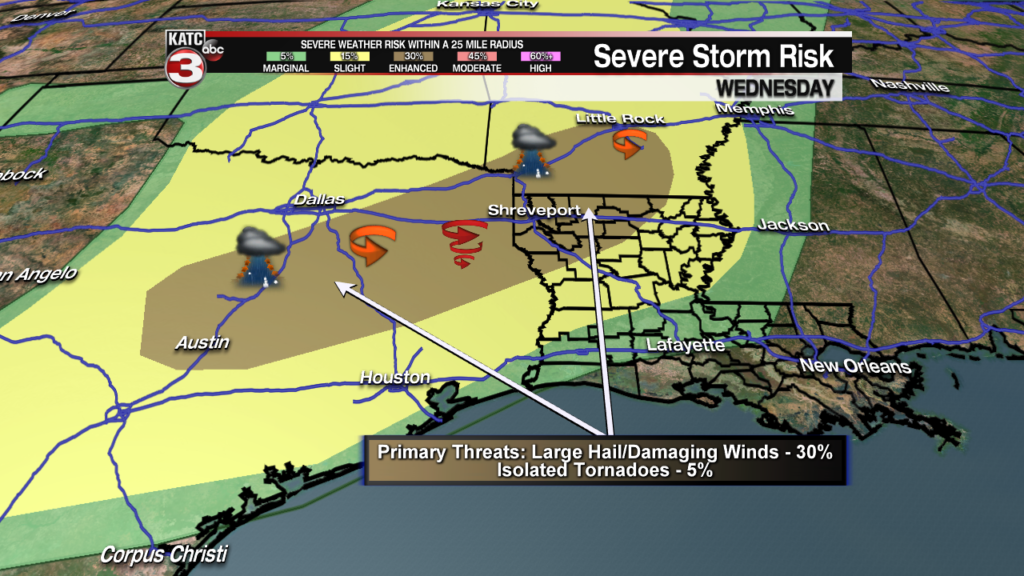 The SPC puts most of Acadiana along and north of the I-10 corridor under a slight risk of a few severe storms that could produce damaging winds Thursday. 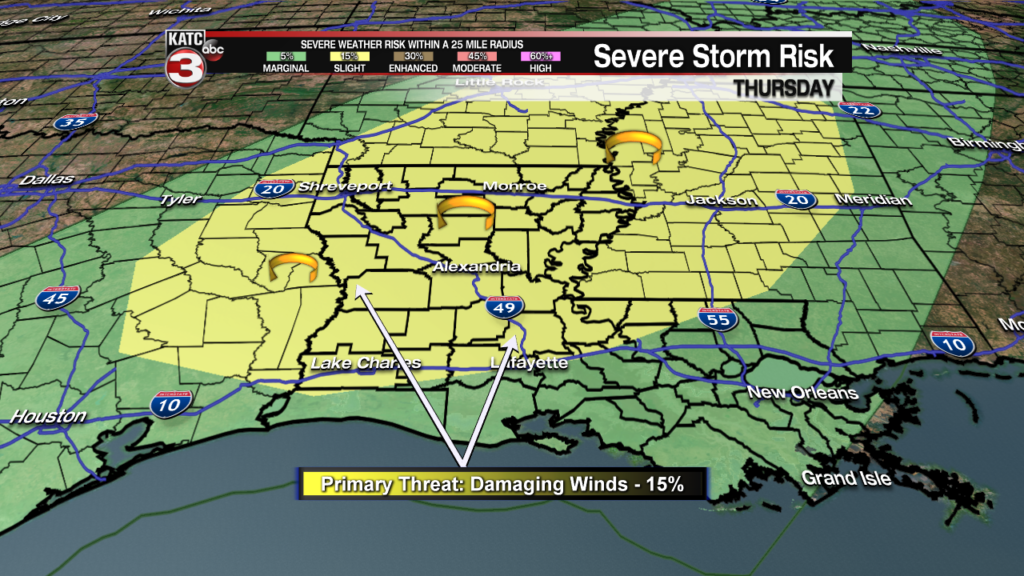 Per the latest European Model, it appears that an inch or two of rain will be possible in most spots across Acadiana through Thursday, but the threat of heavier rains (which could ultimately prompt portions of Acadiana to become under a Flash Flood Watch) should arrive Friday, with heaviest, most intense storms possible Saturday into Saturday night.

Rainfall totals, per the European model could be in the 3-6″+ range across Acadiana from Wednesday through Saturday night inclusive. 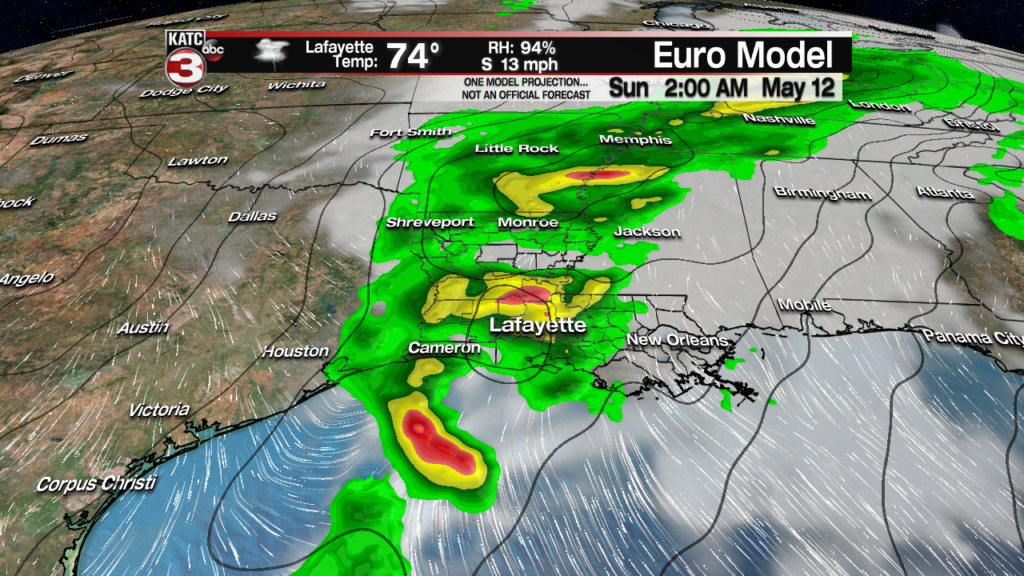 And as usual, it’s not so much about the amount, but rainfall rates…this factor will be watch closely over the next few days. At any time a storm system in Acadiana could produce a 2-4″ rainfall in just an hour or two, which almost always leads to some localized street flooding. 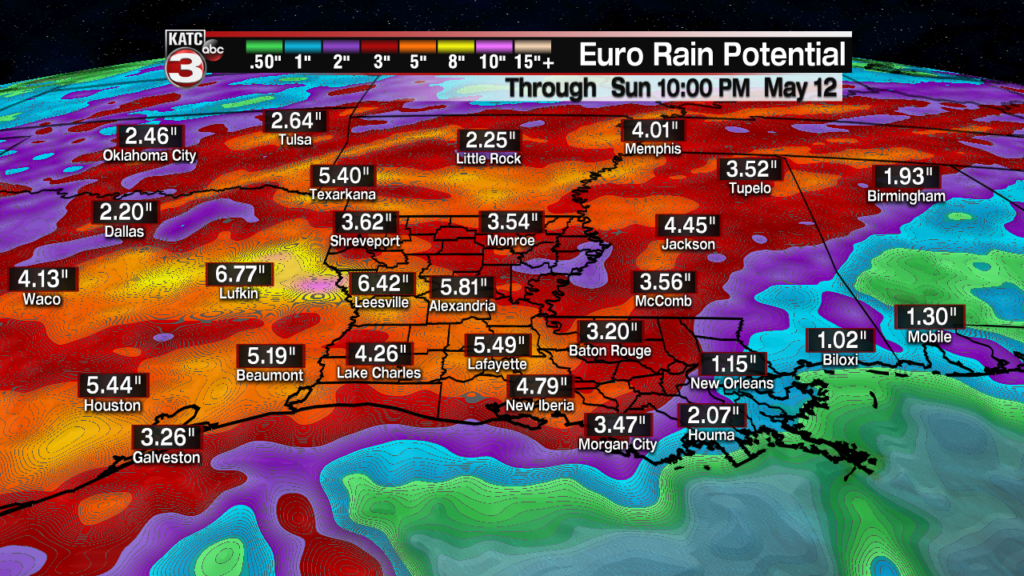 The latest GFS Model is much more optimistic for Acadiana’s rain totals with amounts 3″ or less, but there remains a distinct area from Central Louisiana to the west into Eastern Texas where 5-8′ will be most likely…all big numbers to watch on how it ultimately plays out…as these numbers on all models will likely change moving forward. 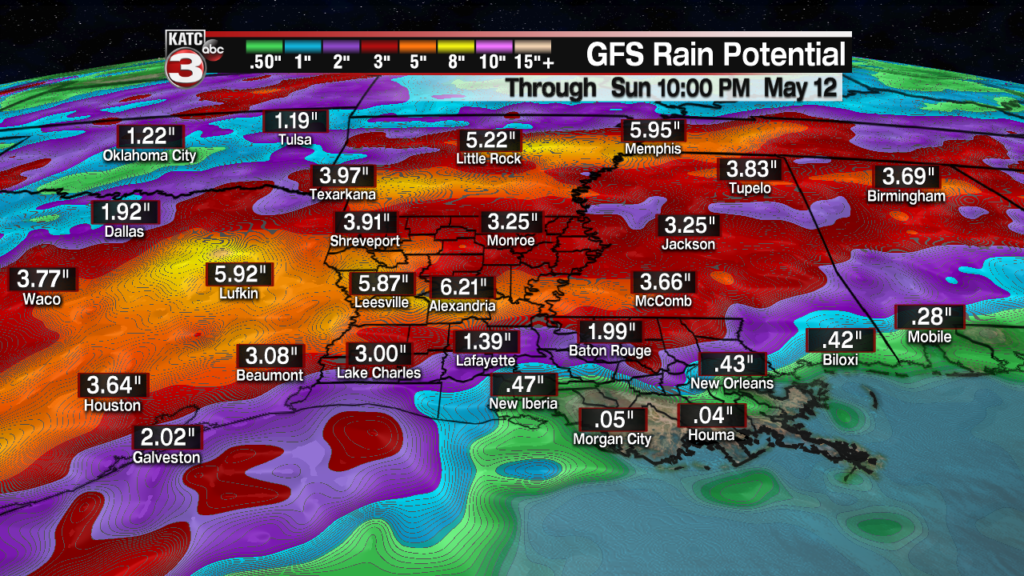 With this all being said, it appears that the greatest threat of flooding could be mainly north and west of Acadiana proper, from areas of Eastern Texas into extreme Western (end perhaps Central) Louisiana, where upward of 8-10″ of rain or more may accumulate over several days.

In addition, there could be another severe weather threat for Acadiana with the storms Saturday into Saturday night, perhaps there may be a marginal risk for Friday too.

The Euro Model has been the most optimistic for the latter part of the weekend with storms ending early Sunday, followed by sunshine into the afternoon. The model goes on to indicate (like yesterday) a quiet and pleasant weather pattern for early next week.

Meanwhile, the GFS Model is much more pessimistic on keeping fairly high rain chances and the threat of heavy rains Sunday into early next week…we’ll see, as occasionally the GFS model gets lucky, and is right.

For now consult the KATC 10 Day Forecast for the latest on the local rain chances.